Running to the Battle 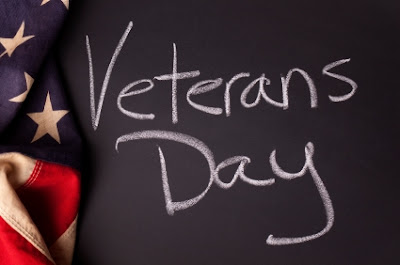 Steve Camp did a song years ago called Run to the Battle. It was a song about how as Christians we need to be actively involved in the world around us, ministering to the world and sharing Jesus with them. It is a song about not getting complacent and comfortable in our church pews while refusing to get our hands dirty or break a sweat, or take a risk to get right into the heart of the battle - you know, follow the example of Jesus and go where the people are. Here's a line from the song that captures the essence of it:

"Some people want to live within the sounds of chapel bells, but I want to run a mission a yard from the gates of hell"


It takes courage to do that. It takes sacrifice. It takes vision.


Today, as we celebrate Veterans' Day I think about this song. I have watched TV footage of the war in the Middle East. Sometimes I sit with my husband and watch the documentaries about bomb squads or special forces groups. It is intense just watching those things and I can't begin to imagine living them day in and day out, for months at a time, separated from my home and my family, never knowing if today will be the day that something goes horribly wrong.

Today I am thankful that God instills in some the extraordinary courage to choose a life that places them directly in the path of danger - for me. I am humbled and amazed by them, and honored to be an American because of them.

Do you know what it is to have someone place themselves between you and danger? I do. When I worked at Florida State Hospital in the forensic womens' admissions unit we got patients from all over the state of Florida, most of whom had been sitting in jail cells for months without medication and were very sick by the time they got to us. Many were aggressive and violent. It was a frightening place at times. The ward staff - those who were on the unit with the patients for eight straight hours - bore the brunt of this behavior. They were often attacked by the residents - hit, kicked, jumped on, spit on, etc... They came to work every day knowing what would happen. On several occasions a resident would be angry at me or just psychotic and out of control., and would start to come after me. More than once our wonderful ward staff would place themselves between me and that resident - to protect me. ME. That was humbling and reassuring at the same time, and I was grateful every day.

In the same way our country's armed forces willingly take up the job of protection. They deliberately put themselves in harms way, not because they are less valuable or more expendable than we are, but because the honor that is part of them drives them to do it. They do battle every day, not just with human enemies, but with loneliness and fear, with despair, and with their own private demons. They are ordinary people just like us, who have taken on an extraordinary task. Because they do it with excellence we live freely, able to grumble about politics and politicians, taxes and the economy.

We go about our days uninterrupted by danger and most of what is going on in the world because these men and women have disrupted their lives to serve in our places.

Today, remember our serving armed forces. Pray for their safety and for their families. Pray for God's presence with them in a special way today. Thank God for these honorable servants. Pray also for retired veterans dealing with the aftermath - physical and emotional - of service, and pray for those who have been traumatically injured in service. Ask that God will make clear to them the amazing plan he has for each and every life.

Make a special effort today to say "Thank you" to a Vet. Let's never forget or take them or their service and sacrifice for granted.

Do you know a family with a parent or spouse who is deployed? What can you do for them today, this week, during the holidays?
Posted by Sherri at 3:24 AM

Email ThisBlogThis!Share to TwitterShare to FacebookShare to Pinterest
Labels: Veterans