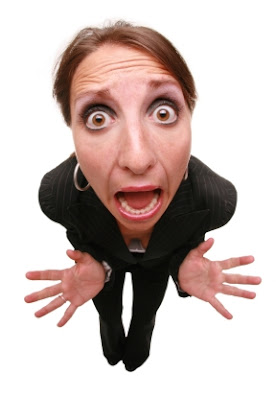 Do you ever just want to

Surprises are great, aren't they? Well, sometimes they're great. Sometimes all they're great for is inducing panic. Yesterday morning I was preparing to speak to some high school kids about suicide. It was something that had been in the news recently and many of the kids at this school knew the girl who killed herself. The school wanted to offer some information and hope and support, so my chaplain volunteered me. Thanks, ever so much!

As I was preparing and making some copies of things to hand out he said, "That's not going to be enough."

I said, "How many kids do they have in two classes?"

He said, "It's not just a single class. It's all the eleventh and twelfth graders, then all the ninth and tenth graders. In the auditorium."

He sent a text to the administrator and five minutes later I found out the groups of 15-20 I had been expecting were actually groups of 350 - 400! OH my goodness! Now preparation for the two groups is totally different and so is the fear that accompanies it. I'm not a dynamic speaker and have difficulty sometimes collecting my thoughts in front of large crowds. I had one hour to revamp my outline and prepare myself mentally to stand up in front of these two large groups and make some sense out of my notes.

I asked people to pray and sent a text to my husband to pray as well, explaining this situation. I went into the bathroom - the only place you can be alone in our office - and prayed. I just gave it all to God because that's all I could do. There wasn't time for anything else and backing out just wasn't an option. I knew that what I had to do was going to be completely in God's hands and in his power. As I prayed and released it and myself to God I felt a strange and wonderful peace in my heart. It was so beautiful! I was still nervous and still would have chickened out if given the chance, but there was also that peace that God promises to give me the words to say when I need them, and that he never calls me to do something that his power can't deliver.

"I can do everything through him who gives me strength."
Philippians 4:13

This verse and the promise in it stayed in my head and heart throughout the morning. I didn't suddenly become the greatest public speaker in the world, but I did get the message across, and we were able to spend time with several students who needed help.

Was it worth it? For several reasons, yes, not least of which it was a time when I truly had to rely on God to get me through.

This wasn't an earth shattering, life-altering situation but it could have been. For some of you it is right now, even as you read this. Will God do the same thing for you that he did for me? Absolutely!

It doesn't matter how different our situations may be, God is who he is - all the time. He never changes, and he never fails. Trust him to be faithful. He is waiting to empower you.

Your turn:  What situations have you faced or face now that you only get through by God's power? What promises do you lean on besides this one in Philippians?

I am praying for you today.