Lent Day 32 - How Little Becomes Much 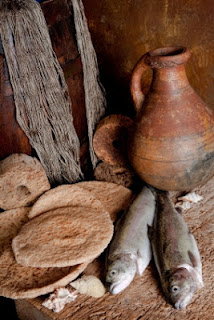 “When the apostles returned, they reported to Jesus what they had done. Then he took them with him and they withdrew by themselves to a town called Bethsaida, but the crowds learned about it and followed him. He welcomed them and spoke to them about the kingdom of God, and healed those who needed healing.
Late in the afternoon the Twelve came to him and said, ‘Send the crowds away so they can go to the surrounding villages and countryside and find food and lodging, because we are in a remote place here.’
He replied, ‘You give them something to eat.’
They answered, ‘We have only five loaves of bread and two fish – unless we go and buy food for all this crowd.’ (About five thousand men were there.)
But he said to his disciples, ‘Have them sit down in groups of about fifty each.’
The disciples did so, and everybody sat down. Taking the five loaves and the two fish and looking up to heaven, he gave thanks and broke them. Then he gave them to the disciples to set before the people. They all ate and were satisfied, and the disciples picked up twelve baskets full of broken pieces that were left over.”
Luke 9:10-17

God has given each of us gifts and talents. Some of those are primary and we demonstrate them in the way we make a living, and in the service we give to our church and our community. Other gifts and talents may not be so highly developed, but if we have them we can be assured that they are there with purpose, and not some genetic mutation. We can also be confident that along with that talent, however unimpressive we may believe it to be, there will come an opportunity to use it for someone’s benefit and to God’s glory.

The disciples were unequipped spiritually, physically, and mentally, to meet the needs of the five thousand. We can give them credit for recognizing the need of the people to eat – maybe because they recognized their own need, and they did take that need to Jesus – in case he missed it.

Jesus gave a two-fold lesson that day on the hill. First, he would not let them pass the problem on to others. They were in a remote place, far from the resources they needed. Jesus basically said, ‘You’re the ones who are here right now; you take care of the need I have placed before you.’ Then knowing that on their own they could not possibly begin to scratch the surface of that need, he told them to bring what they had to him.

He calls each of us to do that every day. Bring what we have to him. Think about the things you can do. It may be something so mundane that you don’t even consider it a talent. It’s not really a talent if everyone can do it, right? Making phone calls, stuffing envelopes, cleaning a house…anyone can do that. Maybe you can’t sing very well, but someone needs you to sing with the children this Sunday. Maybe you’re not a gourmet cook, but a family you know needs a meal prepared while the mother is sick. Maybe you don’t have the biggest, grandest home, but a new couple in church needs to make friends and feel welcome. The list could go on and on.

Let’s remember two things: we don’t have permission to ignore or pass to someone else a need that God places before us, and he will never place a need before us that he will not meet abundantly. Verse seventeen says, “They all ate and were satisfied.” Wouldn’t it be great at the end of the day to look back at something we had done that day and KNOW it was God because we KNOW it couldn’t have been us?

In your prayer time today, thank God for the abilities, talents, gifts and resources you have – great and small – and give them back to him to use as he will. Thank him for what he will do with your loaves and fish today.

I am praying for you today.