Lent Day 35 - In the Beginning 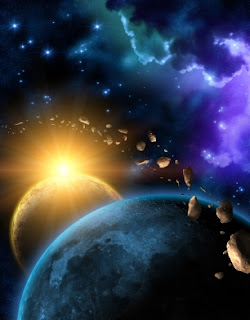 Holy Week. The week leading up to Christ's crucifixion and resurrection.

As I read the scriptures from John my brain understands the words, but my finite, human self continues to struggle with the concept of Christ here from the beginning. I continue to want to mark a starting point for it all.

I know he was here in the beginning, but exactly when did that happen?

What is even more incomprehensible to me is that in the beginning God knew everything. He knew about creation, he knew we would fall and fail horribly, unleashing evil into his perfect creation, an evil that would plague mankind every second of every day - until he says "enough".

If I were God and I knew all of that ahead of time I don't think I would ever have created man, or at least not given him free will. And if I had created man with free will, I would have exterminated the entire race long ago. I'm not very patient, and I certainly don't love unconditionally.

Think about it. In the beginning God knew about me and had a purpose. He said, "I will put Sherri Stone in the twenty-first century because that is where I can use her the most." Put your name in that sentence. In the beginning he knew me. He knew you, too.

What we celebrate this week is not about a colossal miscalculation that God has been trying to correct since the fall. He is a God of order and he has a plan that he has been working out every moment since the beginning - that is before the fall. I can't possibly understand what He was doing when he set up something that would cause him so much pain for so long, but He has never been surprised by His creation. He has known us a long time - he saw us coming.

As we spend this week preparing to celebrate the resurrection of Christ and His victory over eternal death, take some quiet time before the Lord to meditate on the awesomeness of "In the beginning."

We are but a vapor, the scripture says, here for the blink of an eye and yet he created us and placed us in his creation with exquisite care. If that doesn't tell you how precious and important you are to him I'm not sure what will.


Jesus' birth, life, death and resurrection were planned from the beginning. They are not some elaborate 'Plan B' that God had to work out when man sinned.


As you prepare to celebrate on Easter Sunday let part of that celebration be a time of acknowledging the awesomeness of God - from the beginning. Get away from distractions, turn off the cell phone and computer, get off by yourself for some time to be still before the greatness of God. You will gain a deeper understanding of Easter and a more intimate fellowship with the Father.


I am praying for you today.