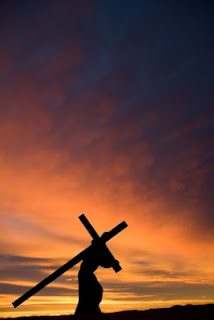 "When they came to the place called the Skull, there they crucified him...
It was now about the sixth hour, and darkness came over the whole land until the ninth hour, for the sun stopped shining. And the curtain of the temple was torn in two. Jesus called out with a loud voice, Father, into your hands I commit my spirit. When he had said this he breathed his last."

It all came down to this moment, when Jesus committed himself to his Father and finished his work on earth.

Crucifixion was a common form of execution in Jesus' day and as with other times in history I'm sure that for many people watching an execution was just another form of entertainment. Even so, they had to know that something was different about this one. No, not something - Someone. Creation itself reacted to the death of its Master. Even one of the guards said, "Surely he was the Son of God."

Just as his life had been different, so was his death. It was death on his terms and according to his plan. He deliberately chose a path for himself that led to pain and fear, betrayal and abandonment - all so he could set us free.

What was it like for him? We will never know this side of heaven.

If I had the ability to free myself from the pain and torture would I have chosen to endure it for someone else? What about someone who will not be born for a hundred years? a thousand?

Jesus felt all of the human emotions: gut-wrenching fear, doubt, anger at the betrayal by his friends, physical, mental and emotional pain, and finally, he knew the pain and emptiness of God turning away.

Love overcame it all. Love for you and for me.

His sacrifice does not fade in importance and power the further history moves away from the time of the Cross. It is as powerful today as it was on that day at the place called the Skull.

Surely he was the Son of God. He is our Savior, the sacrifice for our sins. As horrible as his physical death was, it has saved us from everlasting death and separation from God.

He went to the Cross for you.

He stayed there for you.

Take a moment in his presence to worship.
Posted by Sherri at 1:00 AM