"Search me, O God, and know my heart;
test me and know my anxious
thoughts. See if there is any
offensive way in me, and lead me in the
way everlasting." Psalm 139:23-24

My mother has an impressively green thumb. She can find a stick in the yard, wedge it down into a pot of soil, and come back some time later to find a beautiful flower. Sadly, I did not inherit that talent. My husband says that plants beg not to be taken to our home because they know a slow, painful, dry death awaits.

I often forget to water.

I went to the opposite extreme once and actually killed a cactus. Too much water. Go figure.

In my defense, it's been quite a while now since I killed a plant. I'm getting better, and more attentive. Still no expert, though. I do know that plant seeds are often scattered by birds far from where you would normally find them. No surprise, then, that they often end up where they do not belong. 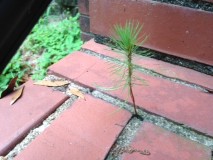 I found this little thing on our front steps. Actually, I stepped over it for a few weeks because, well... I was lazy? It was little and not hurting anything? It kind of fascinated me? All of the above?

Now the thing is, if I had tried to get something to grow in a crack on my front steps it would never have worked. But since that little seed was somehow deposited there at just the right time and not noticed as it began to grow, it ended up like this.

I have to admit, there's a part of me that would like to have left it there to see how big it would get. We could use a little shade on our front steps. I do understand, though, that as it grew it would begin to separate the bricks and destroy the steps. It would not grow kindly in its own space. In fact, in time, it would tear apart the very thing giving it shelter and safety and structure. It wouldn't care that it didn't belong there. It would simply take everything it needed, regardless of the damage it inflicted.

So, it had to come up, but you know what? Even as small as it was, it did not come up without a fight. The root was easily twice as long as what was visible above the ground. Not so cute anymore.

Sin is like that sometimes. Oh, we all have things we readily identify as sinful and not pleasing to God, but what about those things that we 'see' but step over because we're too lazy, or because it's so little it couldn't really be a problem, or - if we're honest - we're just a little bit fascinated by it. That private little thing that no one knows about. It's only ours and we want to wrap our arms around it and hold it close and keep it safe. That thing.

That thing that even now is putting down a tap root in your heart that will take TNT to dislodge.

Sometimes we see the danger and shrug our shoulders and say, "That will never happen to me."

Sometimes we don't want to look too closely because if we do we might have to change something. Like - us.

Sometimes, it's so small or so hidden we don't even know it's there yet. But God does.

"Man looks at the outward appearance, but
the Lord looks at he heart." 1 Samuel 16:7

We will never be good at guarding or honestly seeing our own hearts. We're not capable of that kind of unbiased self-examination. But God is the master of it. He knows every nook and cranny - and every single thing taking root there.

He sees it all.

Now we can look at that one of two ways. We can either see a scary, big-brother's-watching kind of thing, or we can be thankful that God does not look at our hearts in order to condemn us, though there is much there to condemn.

No. He searches our hearts to root out every single thing that would separate us from fellowship with him and from the abundant life he sacrificed to give us.

We can pray this prayer from the Psalms with complete security knowing that it is his will to refine us and make us more like him. Don't make him chase you down and get your attention the hard way. Ask him right now to search you out and let you see what he does. Then ask for his power to change those things, dig them out and throw them on the spiritual burn pile.

You can't change yourself. You can't even be willing for him to change you in your own strength. It's all on him. You just have to be willing to be made willing.

And that comes from him, too.

He is faithful to do in us what needs to be done. Uprooting things takes effort, persistence, and determination. No one is more determined than Jesus for you to be free. No one pursues you with more persistence.

No one sees you like he does. And no one loves you more.

Please take a minute and subscribe to my blog by adding your email address at the top right. You'll automatically get new posts and information about my next book and other writing projects.

Some things you only have to do once...have your appendix taken out, graduate from high school, give your heart to Jesus. Most things, though, we do over and over again. And again. And again. You know, the ordinary, everyday activities of life and living.

Contrary being that I am, I have both complained about those things and longed for them. I have stood with my hands on my hips and thought, "I just cleaned these floors six weeks ago. What's with all this dust?"  And the clothes...don't get me started on the ironing! And didn't we just buy groceries? And why can't things just get done and stay done? Is that too much to ask?

I thought about all this one morning as I walked by my fish and wondered, "When did I feed them last?" I have forgotten to water plants until they died, enough times that my husband has some not very nice things to say when I buy new ones. I have almost forgotten to feed Riley before I leave the house in the morning. But Riley barks and whines and won't let me forget for long. Fish can't do that. Their fate is in my hands, poor things.

In the interest of full disclosure, I have NEVER forgotten to feed myself.

But back to my point...which is, in the past couple of months we've been so preoccupied

with hospitals and rehab centers and nursing homes that I found myself sometimes wishing I could just go home and do some laundry, and maybe dust a little. And feed the fish. It's such a simple, mindless task for me. It doesn't take any special effort. I just have to do it. If I don't, eventually we'd be holding a tiny memorial service for them - right before the flush.

I've accepted the fact that those simple tasks that we sometimes complain about are evidence of God's provision for us. Dirty dishes mean we've had plenty to eat. Laundry day means we have clothes to wear and a washer and dryer that work, and the physical ability to carry clothes to the laundry room and put them away when we're done. All those household chores are there because we have a home that is safe and things to put in it. Yes, they are all signs of God's provision for us.

But I think they are God's provision in a way I've not thought about before. That is the peace of doing something normal. We miss it all the time, don't we? I know I do. But sometimes doesn't it feel good and comfortable and restful to just clean up the kitchen? Our lives are so crazy sometimes - work, family issues, school, sickness, life. God cares for us and shores us up through those times, and then he lets us go home and feed the fish.

I'm so thankful for that. I'm so thankful that every moment is a blessing if I will only take time to see it. I love the fact that with God, everything has a purpose to bless us. Even the normal, boring, mundane things we must do over and over again. I hope I can remember that and be thankful. It is God's way of giving me rest in the middle of the busyness. He is so good.

Praying for you today.

Question for you:  What has God done for you lately to give you rest from your busy life?

Ever have one of those days when you wake up with an exhausted body, a heavy heart, and a mind fuzzy with anxiety over something that was to come? 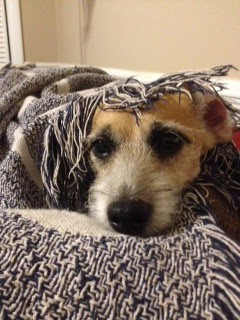 We've had a few days like that at our house lately. It's hard to believe it's early April - this year seems a decade old already. The good thing about this is it's made me stay tight with God. I've fasted this past month and prayed for understanding, wisdom, strength and courage. A lot of courage. Sometimes I think I'm the world's biggest weenie!

No surprise...God has been extraordinarily faithful. He can't help but be that. He promises if we seek him we will find him. He also promises that his mercies are new every morning AND if we keep our minds focused on him instead of our circumstances he will give us perfect peace.

I've struggled a lot lately with how we can trust and still feel anxious or unsettled or afraid. It seems you can't do both, but what I'm coming to believe is that trust is a CHOICE not a feeling. Over and over in my journal I wrote out the things I worried about - the things that made my stomach knot up. Then I wrote:


but I choose to trust you!
Feelings can get in the way, can't they? Especially if you're like me and live more emotionally than practically. I don't mean hysterically or out of control. I mean that you trust your gut when making decisions.
When we're overwhelmed with anxiety or fear, those feelings can get distorted and get in the way. So, I have come to believe that like forgiveness, trust is first a choice, then maybe a feeling.
It's easy to trust when everything is fine and you feel good, isn't it? Much harder when you're in the middle of the storm and getting sea sick from the waves.
Do you trust God to be faithful? Really trust him? You can put him to the test. He will never slip up. He will never forget to take care of you. He will never leave you alone in a storm.
Thank you, Jesus, for pursuing us every minute of every day. For being faithful to us because you have to be faithful to your own nature. Teach us to trust you, to claim your faithfulness every day. Thank you for giving us rest when we feel we can't take another step, and for holding us together when we are broken. Thank you for making the ugly beautiful. We love you so much!
﻿
Posted by Sherri at 8:11 PM No comments: